A 'spot' of customisation! 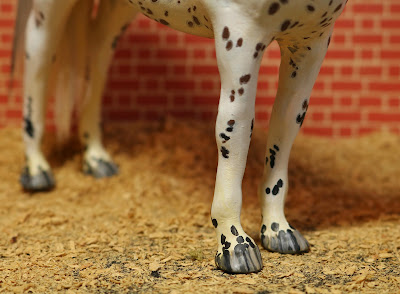 Obligatory 'sorry for not posting, I'm useless' introduction, now onto the main topic!

As you may have noticed, I haven't posted any Julip content in a good long while. I don't hate them, nor am I giving up collecting them, they just aren't my main focus these days. With one thing or another I haven't bought a new Julip in years, my last one being a very generous gift I was given last year right before lockdown. I've got several ideas for orders, but who knows when they'll happen!

Anyway, long story short, a few months ago my friend Paul asked me if I'd like to rehome his solitary Julip. He'd been gifted him a number of years ago and while he liked Julips, this particular one didn't really do anything for him as the appaloosa pattern was a bit unrealistic, and he knew I'd be able to give him a more appreciative home. He suggested I customise him and after seeing photos, I definitely agreed.

With one thing or another, he finally made his way across the pond a couple of weeks ago, and upon opening the box I was greeted to this terrifying sight! 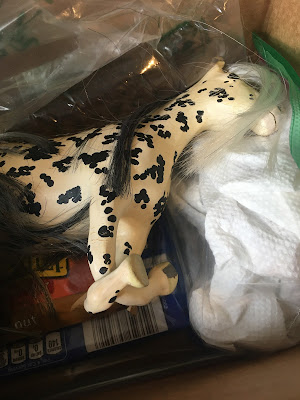 Yes, that's his legs all wrapped around each other!!😨😨😨😨

The good thing about Julip Originals of course is that they have bendy legs, and so after the initial shock had worn off, I took him out of his box and straightened him out a bit. Suffice to say, I think he was a little traumatised by the journey! 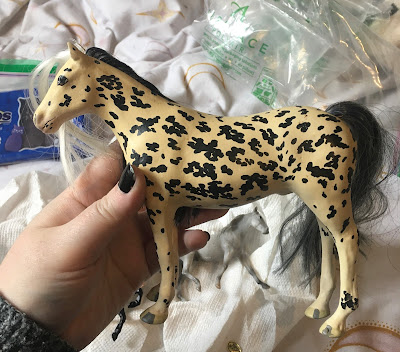 Out of the box, he was, as I already knew him to be from the photos, very yellowed. This is often the case with white Julips, whether as a reaction to sunlight on the paint or as a natural consequence of the latex ageing. I have a few that have gone a little discoloured over time, but most are a nice neutral cream colour whereas this guy was very much yellow!

The spotting pattern was alright in places but overall it just wasn't quite realistic enough for my tastes. Obviously Julips aren't exactly realistic in general, but I like it when the paintjobs are!
Customisation was a definite now!

He was given a quick bath with soap and warm water, then his mane and tail were removed and the first layer of paint added. Long-term, acrylic paint probably won't do the latex much good, but the way I see it, Julips have a finite life anyway, by the very nature of the material they're made from, so I'd rather customise one and have a horse I really like, even if it wouldn't last quite as long as it would in its original form. 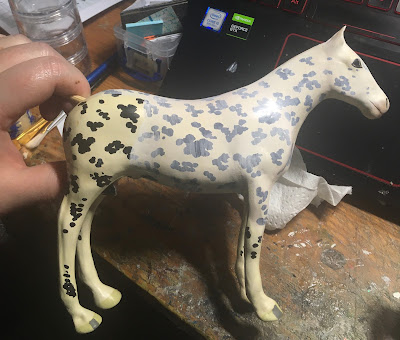 I used a combination of Citadel and Coat d'Arms acrylic paint, in very thin layers. I mostly left the legs alone so the flexibility could be retained as much as possible, though I think I did do one or two very thin coats just to match the body, and I added more detail to his hooves later on.

It took a good long while to get this much coverage, and I was actually really tempted to keep him like this as a Dominant White or an appaloosa that was in the process of greying out. 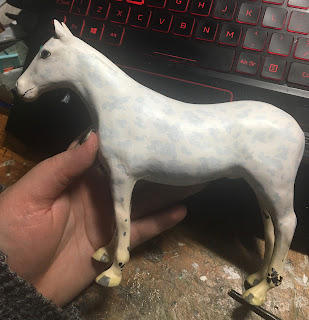 In the end, I wanted spots, so I kept going. By the time it came to add in the new markings, you could still see the old ones in places, but very faint. I actually really liked this because it looked like the kind of ghostly spotting and pigmentation you find on real appaloosas. I also gave him lots of pinking and grey spots on his belly for added detail. 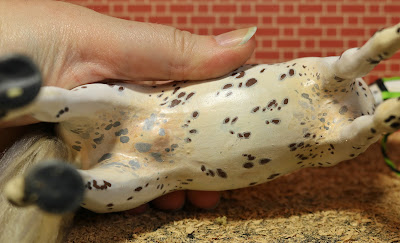 Not a bad transformation if I do say myself! 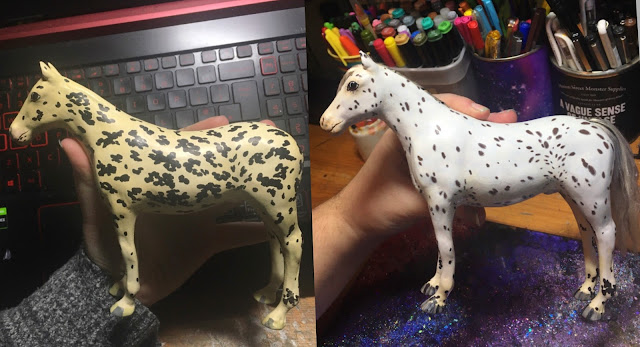 Rather than mohair, I used a mix of viscose fibre for the hair, in vanilla, pewter and black. It's a beautifully soft and shiny fibre, but it makes almost just as much mess as mohair does and because the fibres are so fine, they get everywhere, so consider this fair warning if you want to use it yourself for anything! It also really doesn't respond well to water, which of course I only remembered immediately after spraying some on so I could style it. 🙈

With the trailer for The Legend of Vox Machina (the animated series I helped fund via kickstarter!) being released around the time I was customising him, and my subsequent rewatch of the Briarwood Arc (from the first campaign of Critical Role the series is based on) he could only really be called Percival, after everyone's favourite cursed gunslinger, Lord Percival Fredrickstein von Musel Klossowski de Rolo III of Whitestone. Or, you know, Percy, for short. 😆

I've been a huge Critical Role fan for years, but during lockdown it really became something of a lifeline when there seemed to be nothing else good happening, so it was inevitable that I'd end up having at least one tribute Julip!

Initially he wanted to be called something else but I already had plans for a future horse with that name, so Percival he became. 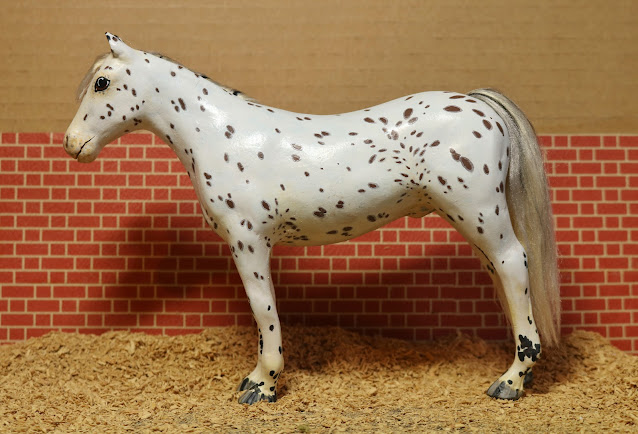 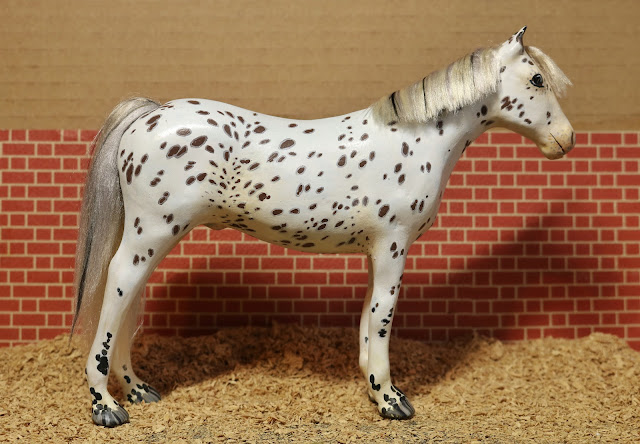 I left his eyes alone, only touching them up in places when I accidentally overpainted them, but they give him such a sweet expression. 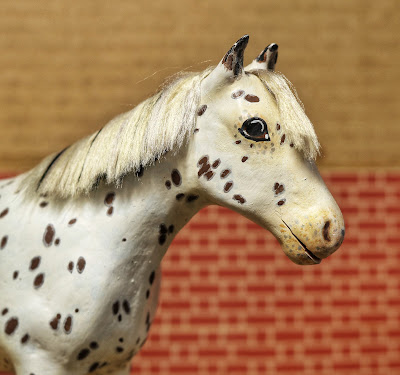 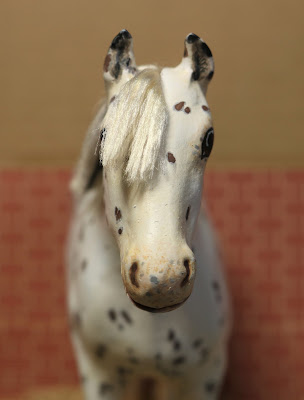 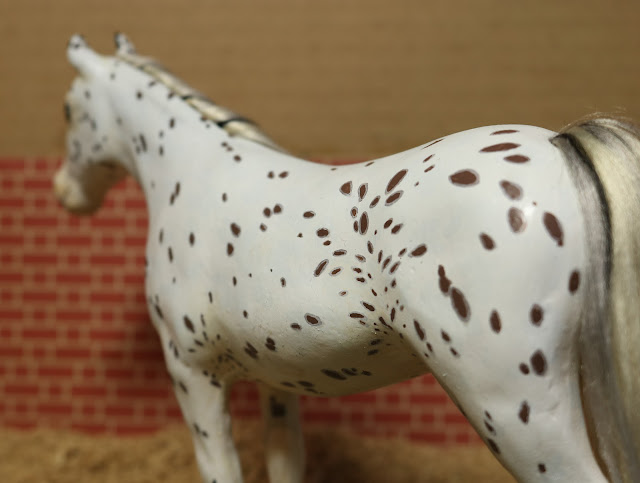 To get the 'halo' effect, I painted on the spots in chocolatey brown paint to begin with, went over them with a thin layer of white, then added the smaller spots in the middle. Not all appaloosas have haloed spots like this of course, but I wanted him to be fancy. 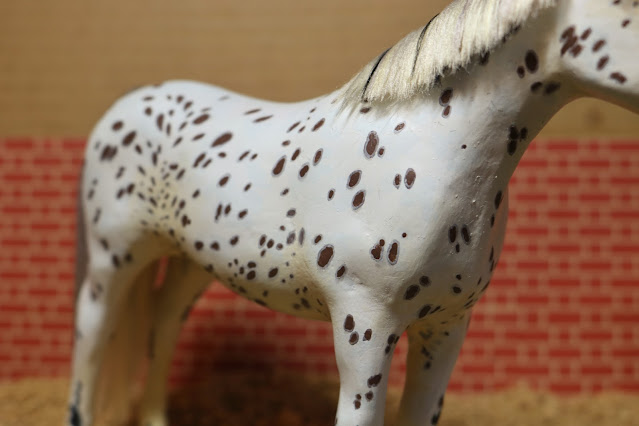 I had intended his colour scheme to be blues and greys to fit in with his namesake, but just before he arrived, I got a parcel from Laura at Julip HQ with a beautiful rug inside - a thank you for helping her design and order the fabric she used to make rugs as prizes for this year's photo show. It was totally unexpected but very much appreciated. All my other horses had their own rugs already, and those that would have matched the green and black colour scheme were far too small as it was made for a larger model. It fit the Hunter mould perfectly however, and as Percival was brand new, he didn't have anything of his own yet so it worked out rather well. I made him a matching headcollar and doesn't he look nice! I may in the future give them to another horse, but he seems happy with them for now. 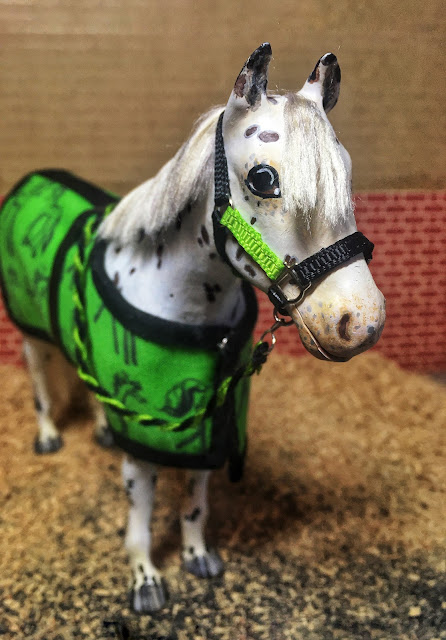 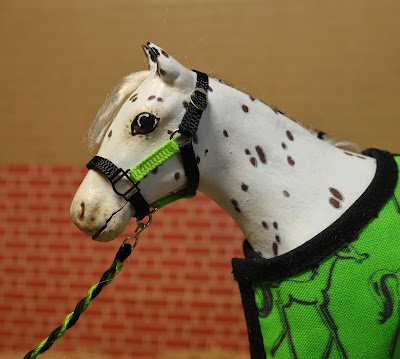 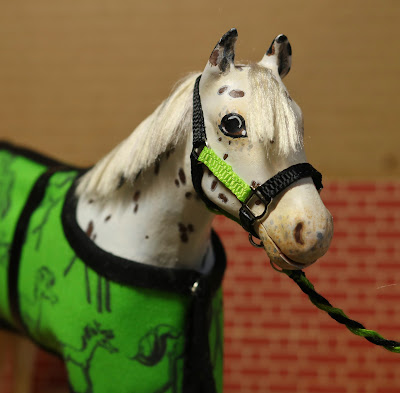 (the fabric design is based on the original vintage chamois leather Julip models, for anyone wondering) 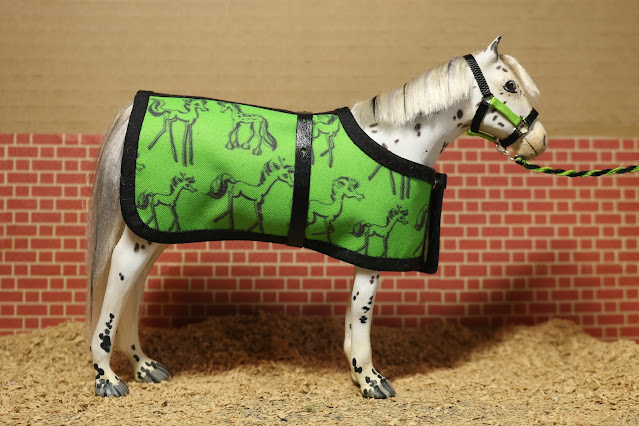 I'm not the biggest fan of the buckle and the surcingle, so I may make some belly straps at some point so it fits in better with the rest of my rugs. 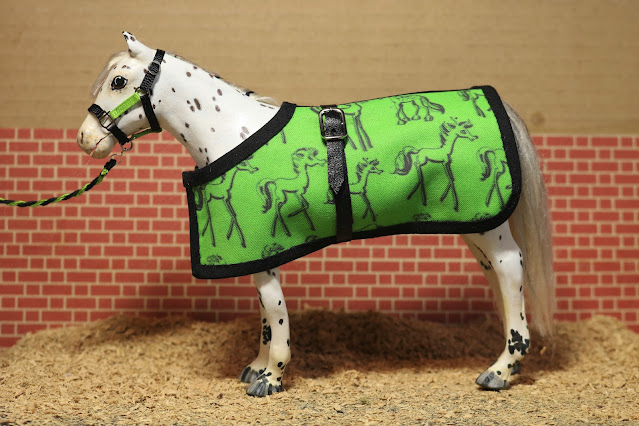 All in all this was a beautiful example of how lovely the model horse hobby is, and I'm so thankful to have such kind and generous friends.

Welcome to the herd, Percy! You're now officially my 74th Julip Original! 😲 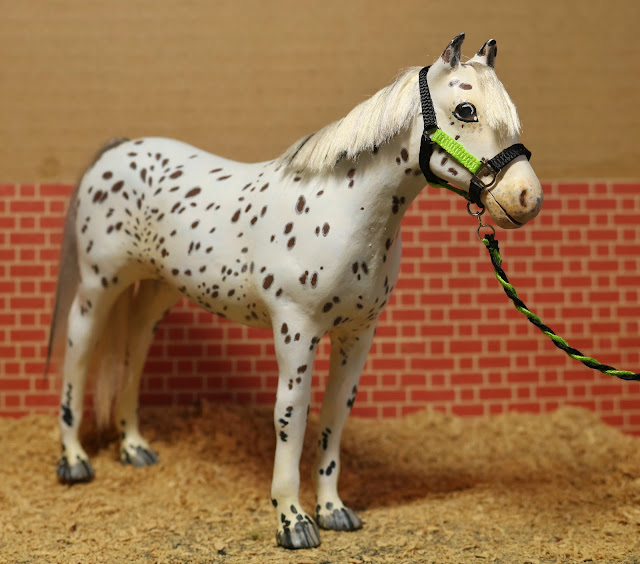