Headcollars and some bonus organising!

I wanted to see if I could earn a bit of a money to put towards spares and other purchases at the show, so I thought I'd make up a batch of headcollars and leadropes to sell at lunchtime. I had a few old ones that I didn't need for my own Julips too, so I'll be selling those as well, though for a bit less as they aren't quite as good as my current efforts. 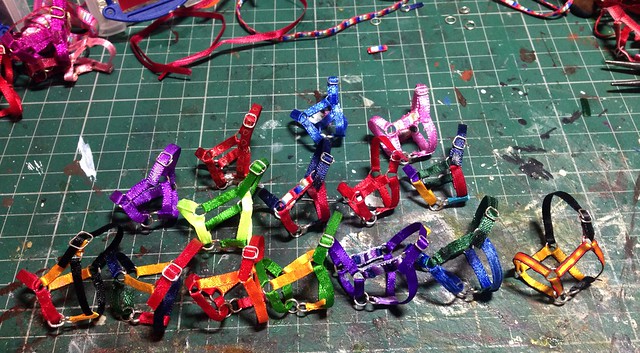 Whilst I was working on them, I finally cracked how to make multicoloured ropes, so I er...got a bit carried away. XD


I also made up a couple of headcollars for a Julip collector in the states who wouldn't be able to make it to the show, but still wanted to feel part of the event.


While I was putting all these together, it made me think, not for the first time, about working out how many horses were in need of tack. I've got nearly 60 Julips altogether now, (eek!) and I aim to have a full set of tack for each of them - a headcollar and leadrope, a rug, and a saddle and bridle. Some already have several rugs but no saddle, or multiple bridles but no rug, and with so many having to share for shows or photographs, it gets very confusing.

In a rare moment of organisation, I found a small notebook and wrote down each horse and a table of tack, so I could cross them off as and when they had each item. Some do technically have certain items of tack, but I've left them off as I intend to replace them with nicer ones soon. Horses with all four were highlighted, although I did the wrong line a couple of times so I've had to mark those slightly differently with different coloured ticks. I included my custom HOTYs as well.


I then decided, in a not so rare moment of madness, that to stop myself from forgetting which saddle belonged to whom, that I'd give them all individual name tags. I found a scrap of white fabric and some glue, and spent a merry hour cutting out tiny, tiny rectangles, gluing them to the bottom of saddles and then waiting for them to dry so I could write on the names.

Pretty soon my desk looked like this, as I ended up replacing a few headcollars I wasn't entirely happy with, with brand new shiny ones, then of course I had to pile up all the old rejected ones and salvage the hardware if they weren't good enough to pass on to someone else. 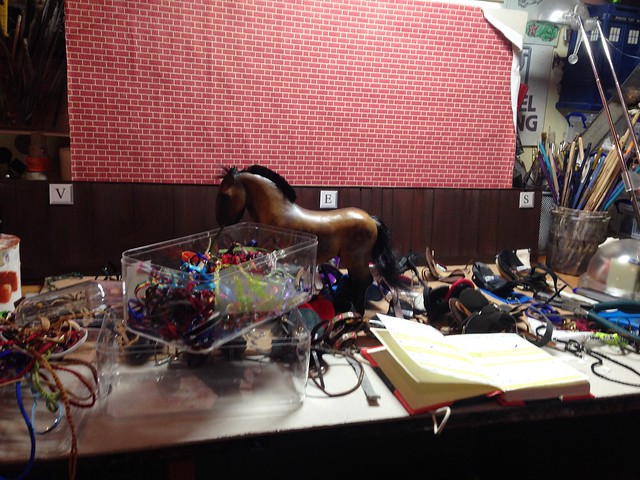 It all paid off though, as I can now say that every single one of my 58 Julip Originals now has their very own personal headcollar and leadrope. Nearly all of them have bridles, a few less have rugs and maybe half have saddles. I've still got a long way to go but this left me feeling very organised and efficient, though I've still got to be able to keep the notebook up to date so perhaps I shouldn't say anything!

I think I'll try to tackle the rug situation next as, well, the nights are drawing in and it'll be winter soon - I don't want them to get cold!