I've been doing some cooking! 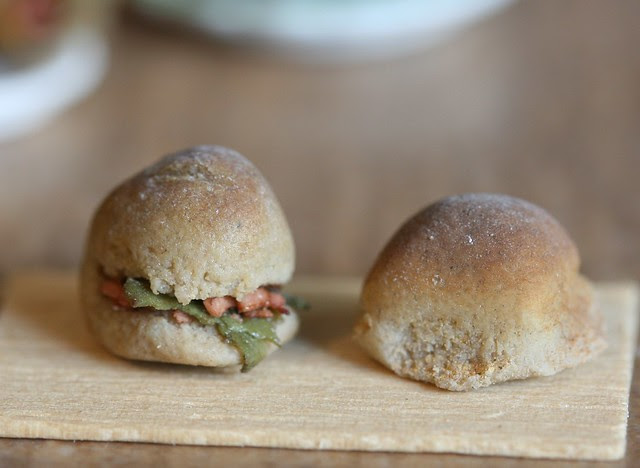 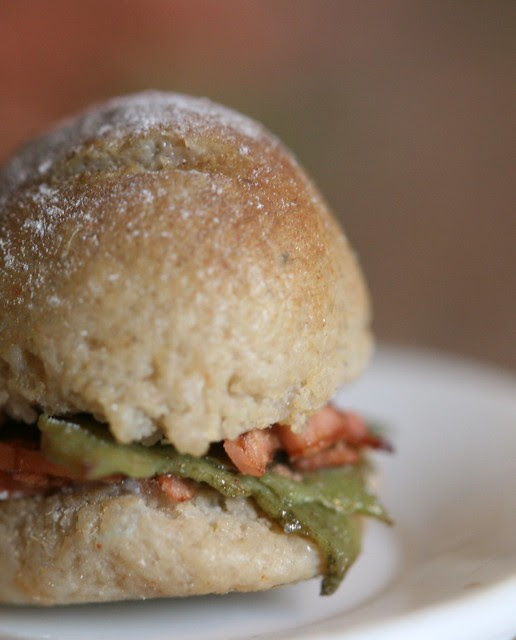 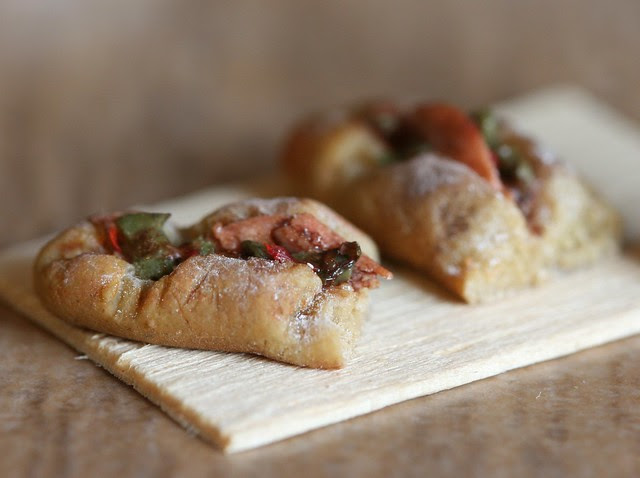 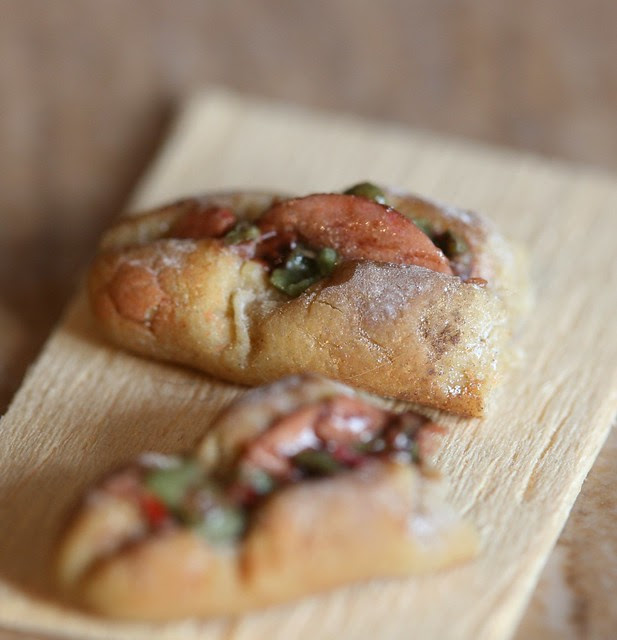 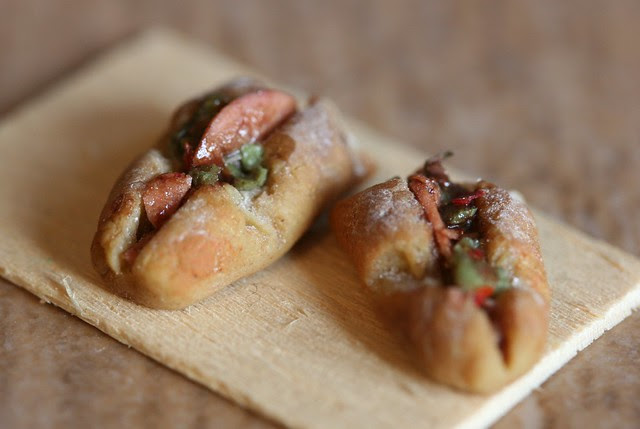 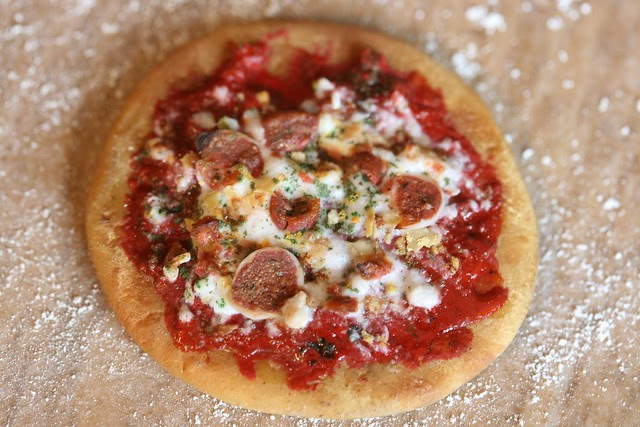 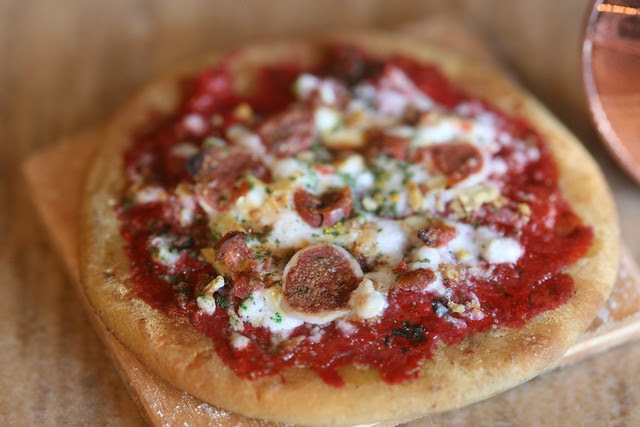 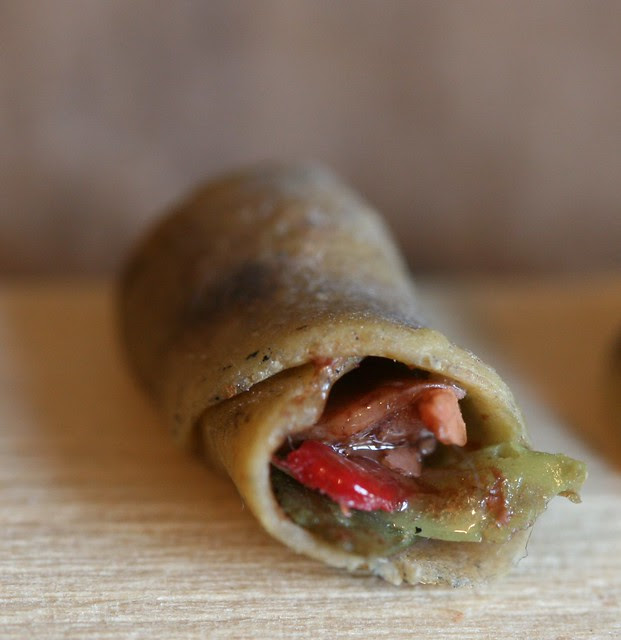 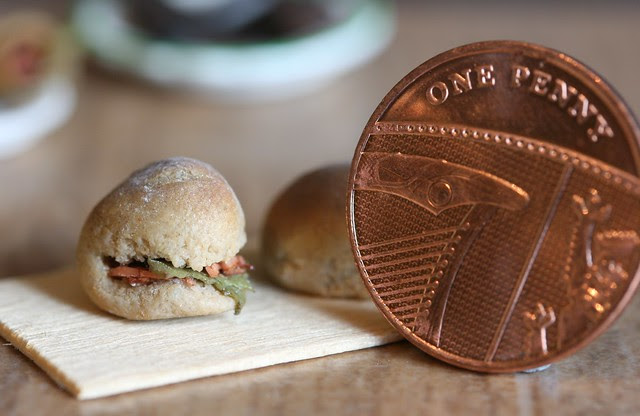 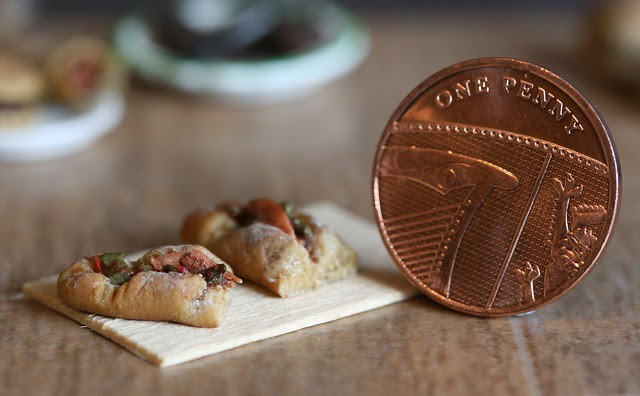 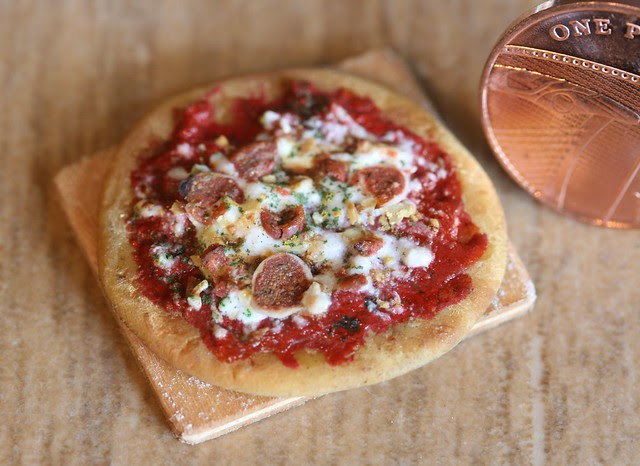 The other day, whilst I was still choked up with the cold, I decided to make some doll's house food. No idea why, I had no real need for it but after having had a really rather delicious bacon roll that morning I knew exactly what I wanted to recreate in miniature.

Prior to this I'd only ever made a couple of really basic food items when I was a kid so I shocked myself by how well they turned out! I didn't have a phenomenally good selection of fimo either so this was made mostly from plain flesh coloured super sculpey, a touch of ochre and dark brown fimo and a lot of pastel dust. I mixed in some very fine sand too which gave it a lovely texture.

I meant to take loads of photos as I went along but as my fingers ended up covered in clay and pastels, I ended up taking very few.

This for example shows the evolution of the pizza. 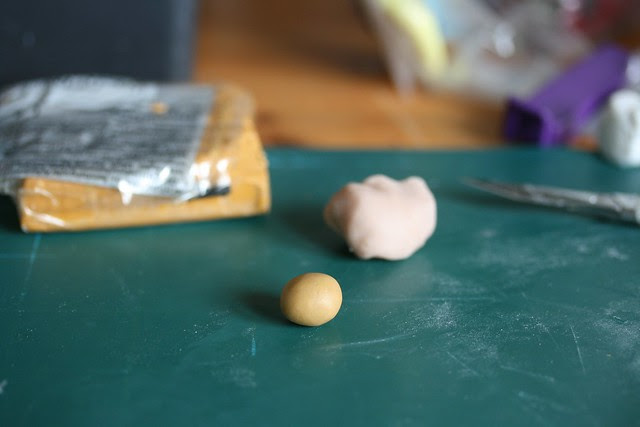 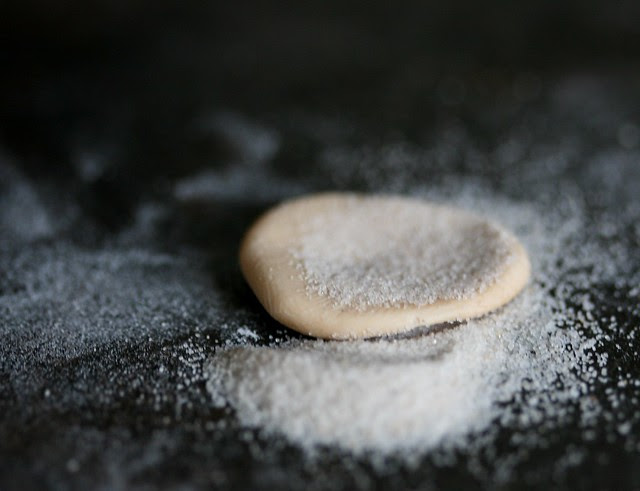 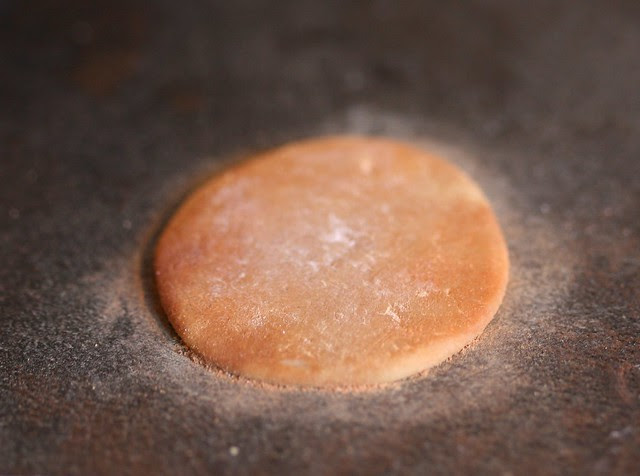 I can't remember what went into all the toppings but the green bits were scenic scatter (for dioramas!) and the cheese and tomato sauce were, I think, paint mixed with liquid fimo. (which sets INSANELY fast, to my initial horror) I have a feeling I mixed in some nail varnish as well but don't quote me on that! I definitely used it at the end of that layer though as it gave it a lovely shine.

I'd really like to make some more pizzas (I don't even like pepperoni, what gives?!) so next time I'll be sure to do a proper walkthrough!

I used -this- tutorial for the pizza, -this- for the baguettes (both with a lot of tweaking as I didn't have everything in the tutorial) but the morning rolls, which ironically were the first thing I made, I came up with  myself.

After mixing up a nice light coloured clay, I mixed in some fine sand and rolled it over a piece of sandpaper to give it texture before forming it into a vaguely roll-shaped lump. After lightly pressing it onto the sandpaper, I used the end of a broken wooden coffee stirrer to drag three of the sides down, replicating the 'tears' that are made when each roll is separated from the rest of the batch. 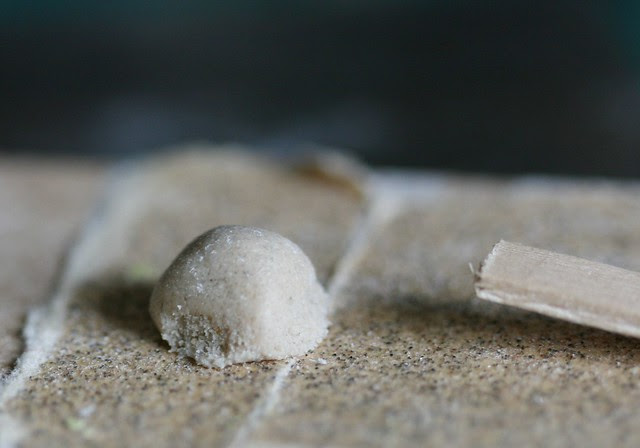 I went over it for half a minute with the heatgun to set its shape before adding in the colours with pastels. It was mostly guesswork as to what colours I used but I went from light to dark with a light dusting of white prior to the final blast of heat to simulate flour. 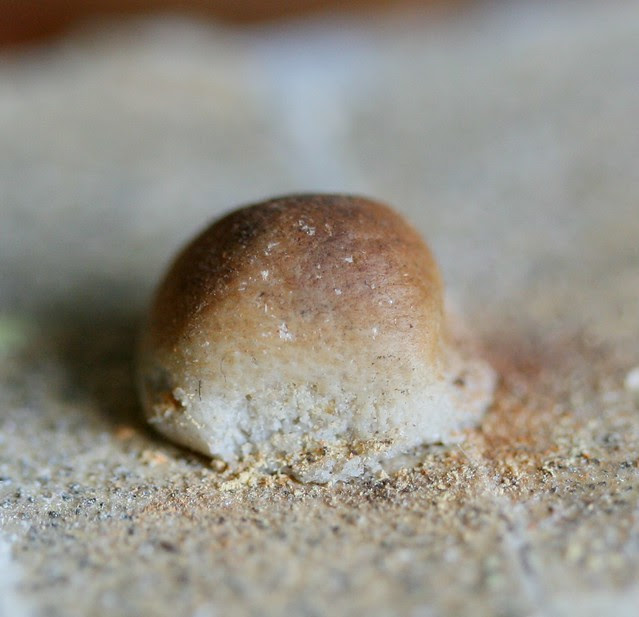 I baked everything in this lot with a handheld heat gun rather than in the oven - more out of laziness than anything else  (going downstairs to the kitchen is just so much effort! XD) but it allowed me a lot more freedom when it came to making things and as they were so small, it only took a couple of minutes to cure each item. It also helpfully set the pastel into the clay so there was no need to go over anything with a sealant!


I was so tempted to just leave these as they were but I felt they needed a filling. 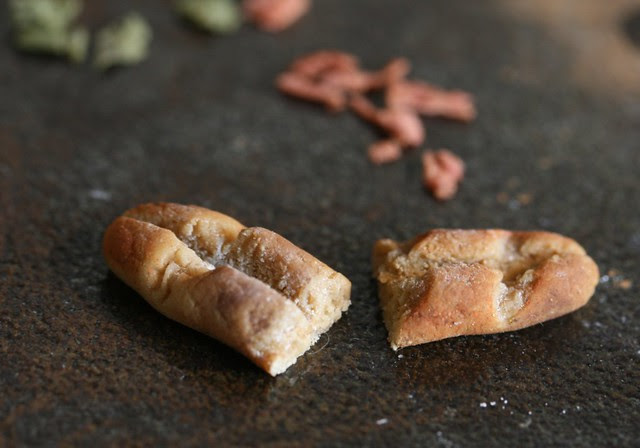 You'll notice that pretty much everything appears to have been filled with a strange looking ham salad. It's not a lack of imagination but one of practicality as I was VERY limited in my fimo colours and until I restocked this week, I didn't have very much to work with at all!

The ham I made up from scrap clay and baked just enough that it retained some flexibility so when I 'carved' it, it curled naturally. It crumbled really nicely too which made it perfect for sprinkling over things. 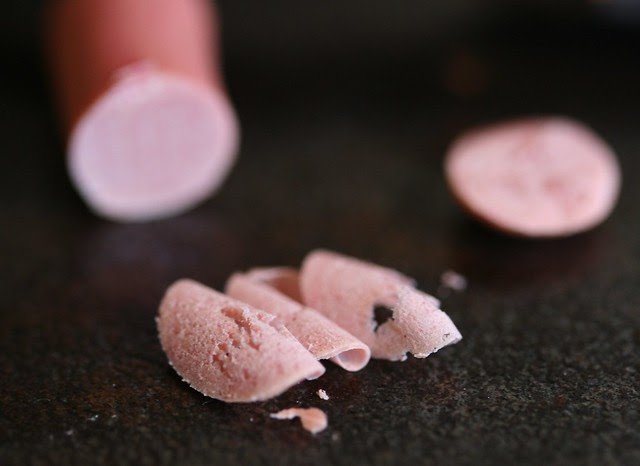 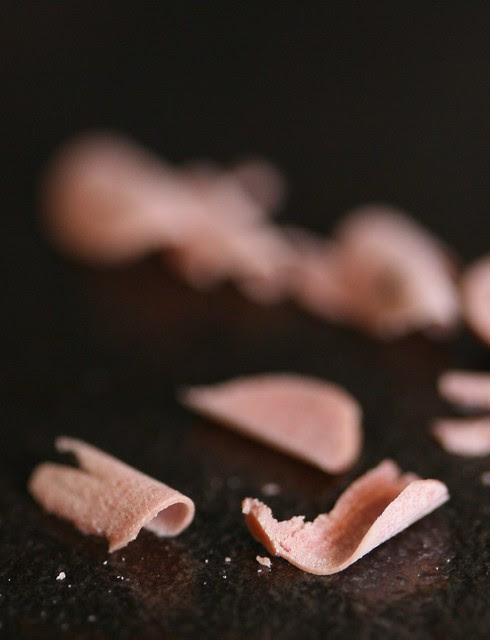 These burgers really didn't turn out all that well. I didn't have any really dark fimo so I mixed some acrylic paint in with the clay. The burgers themselves aren't bad but the bun, oh god, the bun. 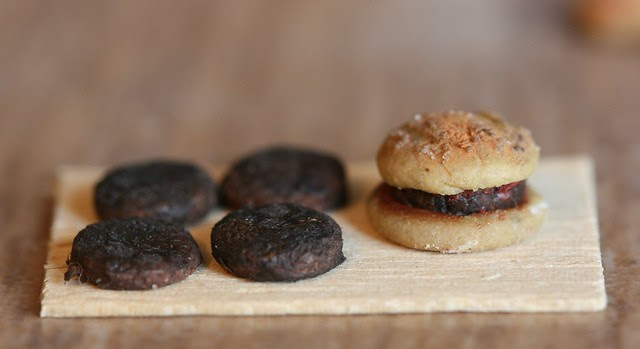 This wrap was a bit of an experiment too and one which really didn't work all that well. 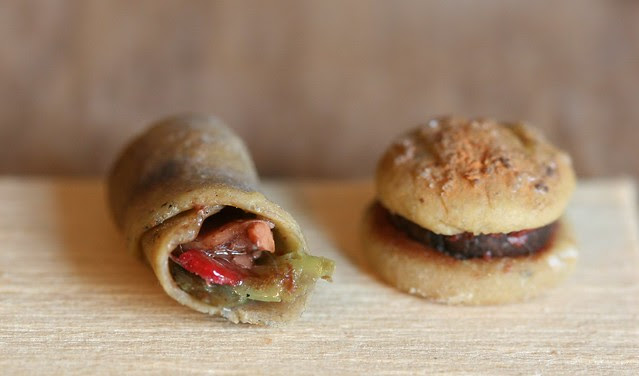 I haven't got photos yet but I also made some Japanese dishes including some chicken katsu curry, miso soup and a noodle dish!

I got some more fimo this week so I'll probably be making some more nibbles soon.
Sushi will DEFINITELY be on the agenda but any other suggestions I'll take on board. :D